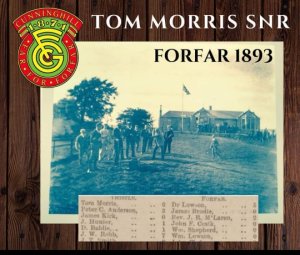 In 1871 James Brodie persuaded Colonel Dempster of Dunnichen to permit the playing of golf over fifty acres of ground to the east and under Brodie’s impetus, Forfar Golf Club was formed with the 18 hole course laid out by Tom Morris of St Andrews. 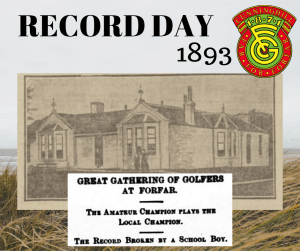 After negotiating the whins and broom and the characteristic undulations of the “”rig and furrow””, the players would return to a rented room at Lochhead Farm (situated behind the current third tee) for rest and refreshment. In 1889 improved prosperity of the Club funded the building of a clubhouse and Ladies were admitted to the Club in 1895.

Course alterations recommended by 5 time Open Champion James Braid were implemented in 1926. The letter with his recommendations is on display in the Clubhouse and can be viewed by clicking here. 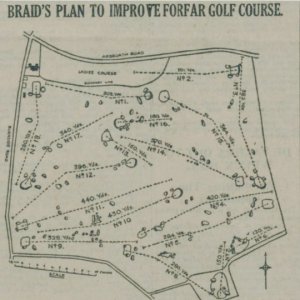 Club Professional Robert Dornan made history during the 1932 Scottish PGA

Championship held at Forfar by becoming the first resident professional to win on his home course. Not only that he also won by a record margin and beat the previous lowest winning total by five strokes. 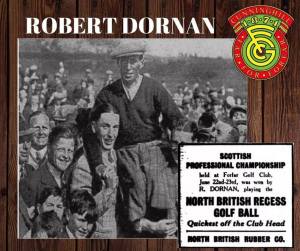 The next time Forfar was to host the Scottish PGA Championship was in 1965 which was won by Eric Brown. Brown played in four Ryder Cup teams and was twice non-playing Captain. His victory at Forfar was his fifth of seven Scottish PGA titles. 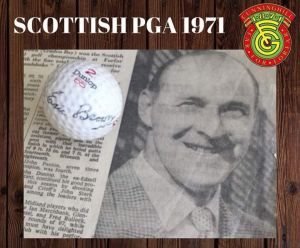 In 1954 a charity match was arranged between resident Professional Alex Black, Dai Rees (South Herts), Bill Shankland (Potters Bar) and Charlie Ward (Little Aston). Spectators were asked to donate money for each birdie or eagle along with an auction to raise further funds.

Among the club’s more celebrated personalities is Sandy Saddler, who after being champion here seven times, went on to represent Scotland no less than 22 times, and Britain fourteen times, between 1959 and 1967. In the last year he was the only player to win two singles in the Walker Cup. 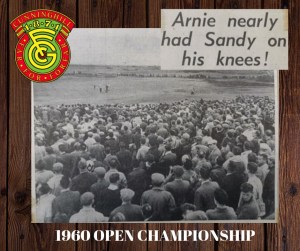 Among the Club’s oldest trophies are the Dunnichen Medal which is presented to the Handicap Match Play Champion. It was presented to the Club by Lady Demster- Metcalf in 1890. Also played are the Lowson Challenge Cup, received from Agnes Lowson in 1901, the Brodie Younger Shield, presented by Dr James A. Lowson in 1898, the Coronation Commemorative Quaich given by Mrs A. Wright in 1902 and the Bruce Medal presented by Robert Bruce in 1869. 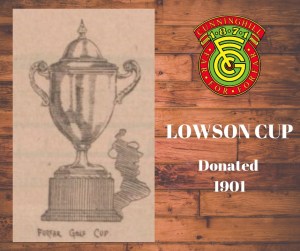 The Club Championship trophy was presented by Mrs Violet Callander wife of the late Bill Callander who in addition to being a Life member at Forfar, was a representative on the SGU for 14 years, Captain of the Scottish team and a member of the R & A. He served there from 1962 until the mid eighties and was for many years Convenor of the Rules Committee. Mrs Callander also donated the drinking fountain between the 5th and 16th Greens in memory of her husband. 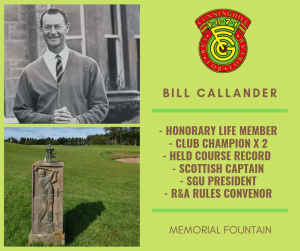 The Club was visited by a third Open Champion when Peter Thomson pictured bottom right) visited in 2007. Mr Thomson was very complimentary about the course and Club and wrote a thank you letter after his game. 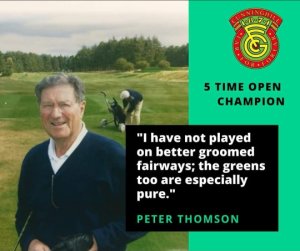 More recently Stuart Wilson has represented Forfar on the National scene. In 2003 he played at Ganton Yorkshire, in the winning Great Britain and Ireland team, which defeated the USA team in the Walker Cup. Stuart has represented Scotland in 21 International matches, represented Britain twice and also played twice for Europe in the Bonallack Trophy v Asia Pacific.

In June 2004 Stuart won the Amateur Championship at St Andrews on the occasion of the 250th Anniversary of the R & A and went on to win the Silver Medal for the lowest amateur at the 2004 Open Championship held at Royal Troon.  Stuart is still involved in international golf in captaincy roles having been the Scottish Boys Captain and the  Junior Ryder Cup Captain for Europe and is currently the Chairman of the GB&I Boys Selection Committee. 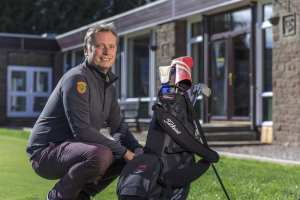